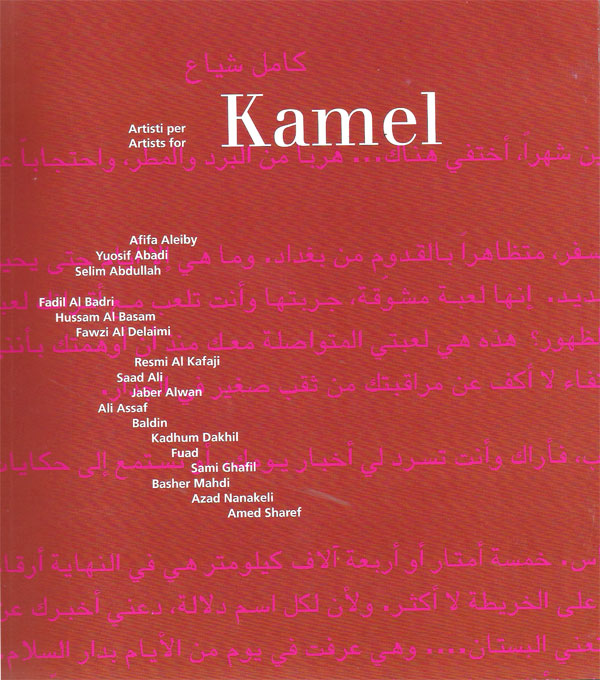 
As if the bullet of the silencer
your killer fired years ago
reached your forehead but not until today!

It bequeathed a title,
apt epitaph for your grave,
which, cautiously, with pallid faces,
we approach and encircle.

Obeying your entreaty
to do away with vacuous words
and to share in your glorious silence,
we contemplate the bullet
which granted the son of Adam
a title worthy of posterity.

We entered,
our faces
the colour of marble figurines,
a gloom typical of the immortal ones
in our eyes.

I saw you amid the crowd
as you confronted your killer's face
lurking behind a mask,
you as ever, content, smiling,
loyal to your promise.

Did you hear death
as he carded the cotton of the pillow
for your head to rest upon?
Or the rats gnawing at the rope
which now lies severed?

My friend, do you hear me?

Autumn had yet to arrive
but seemed to hasten to greet you
with a leafless wreath of berry branch
or a last supper gone stale.

Going to the Outer Reaches

To leave, vanish to the outer reaches such was the poetic departure of Kamel and almost a philosophical gesture of abstinence; a yearning to desert the halls of sterile altercations for the torments of life, where he bravely confronted opponents lurking in daylight.

He died for his dreams, even when felt the end in his finger tips, foretold in the ring tone of phones and the treachery of the wind. Only for him the beginning was the end, the end was the beginning. He carried himself throughout with dignity, smiling in the face of storm and the grime of conflicting intentions. He was optimistic about things no one could be optimistic about only he had reached a point whereby to standstill would mean abandoning logic and denying himself all that was probably possible to him.

As a friend, he was noble as a knight. He would check on our wellbeing, including everyone in his attention without exception. I recall the bouquet of flowers he brought me when I fell ill, it was from him and the of staff at the library of the Ministry of Culture.

We used to phone each other to discuss literature, the burdens of our present, our great expectations, affairs of the literary conference and other projects in the pipeline he had planned which brought us joy. He was a hero who belonged to another age. The unique intellect he possessed was wasted on these bloody times.

How could anyone like him ever belong to this age, when all he was armed with was his vision and carried a dream for a talisman? He was working alongside predators borne of unyielding doctrines. Opponents, who uttered pleading words to camouflage the darkness of their soul, hide the poison dagger behind their masks.

He was a friend who overwhelmed us with his solemn thoughts which managed -much to our shame- crush our chronic despondency and desolation. We saw a wide bolt of hope when we were burdened by despair.

How we used discusses and listens to him as he philosophised about our reality. A reality charged with hatred, fears and violence. He used to say with the tone of one who knows and possessed the vision of a sage: 'It is a country that is resurrecting from nothing. No renaissance is ever without chaos or victims. We ought to accept all this as an inevitable consequence of decades of cruelty and destruction'.

The thunderous news of his lose was a blow to us all. It astounded everyone who knew Kamel or heard of him. I wondered whether his individualism and impartiality was a burden to some. Or whether it was a case of bad timing to fulfil his dream? Can it be that on this land, there is no longer room to contain independent dreams?

His sudden departure to the outer reaches and his absence is as mysterious as a creative act. Akin to the desire of a Sufi, or the notion that visits creative people and dreamers alike, to reject constancy or perhaps the impatience of the hasty ones who could no longer endure the anticipation of waiting.

Thus he reach out beyond, to bring closure to an encounter or mould his visions. To seek beyond, was his covert passion that accompanied him always. To withdraw from the raucous crowd and ascend in thoughts and to transcend reality onto the realm of dreams.

It was there in that landscape that he could transcend our Iraqi impossibilities and reach out for a more welcoming horizon. Beyond stale thoughts and the impotency of doctrines. Outside the insignificance of his comfort zone, is how he preferred to exist in order to bring about a miracle he alone believed in and carried as a burden and accepted as fate.

To seek the outer reaches was not a contradiction of reality or values. His absence have allowed for a higher manifestation of those values he upheld and enable him penetrate all limitations. In being eternally ephemeral his dream will now flourish.

Kamel Shiaa dilemma and perhaps his legacy, was that he combined intellect, impartiality and logic. He was a critic with unique objectivity and an honourable academic. Yet, he was the government consultant, but he remained unwaveringly adhered to his progressive visions for a better society and humanity. He was sketching the strategic vision to an institution which rejected cultural democratic choice. Indeed, it had opposed all activities this man had led, and waged an open war against him in his lifetime.

This unique dreamer transcended the realm of impossibility all by himself, with a smile. Experiencing death in every second of his life: 'Once we realise that there is nothing worth waiting for then we should release our soul, not in surrender but in preparation to a journey to the outer reaches or thereabout'.

I salute you Kamel, you who will remain alive and eternal in our conscience and minds. Noble friend, I salute you and vow not to fail your dreams, to do all in our power to place your luminous legacy along the new paths of Iraq as long as we live.

Translated from Arabic into English by Lily Al-Tai
This text been read on the first anniversary of Kamel shiaa assassination in Baghdad-Iraq at the BOZAR on September 13th 2009.


UN News Centre
26 August 2008 - The head of the United Nations culture agency today condemned the murder of a senior Iraqi Government official who had long worked to protect and preserve his country's cultural heritage.
Kamel Shiya, 57, an adviser at the Iraqi Ministry of Culture, was shot dead by unidentified gunmen in central Baghdad on Saturday afternoon.

UN Educational, Scientific and Cultural Organization (UNESCO) Director-General Koïchiro Matsuura issued a statement describing the killing as a crime against Iraqi society and a sad loss for UNESCO.

"Those who murdered this champion of Iraq's reconstruction must be seen for what they are: criminals working against the interests of the people of Iraq," Mr. Matsuura said, offering his condolences to Mr. Shiya's family, friends and colleagues.

"Mr. Shiya was a devoted public servant who was committed to the safeguarding of Iraq's rich cultural heritage," Mr. Matsuura added.

Since 2003, Mr. Shiya - who was a philosopher by training and a well-known cultural critic - served as UNESCO's focal point in the Ministry of Culture. He also chaired the National Coordinating Committee for the Safeguarding of the Cultural Heritage of Iraq.